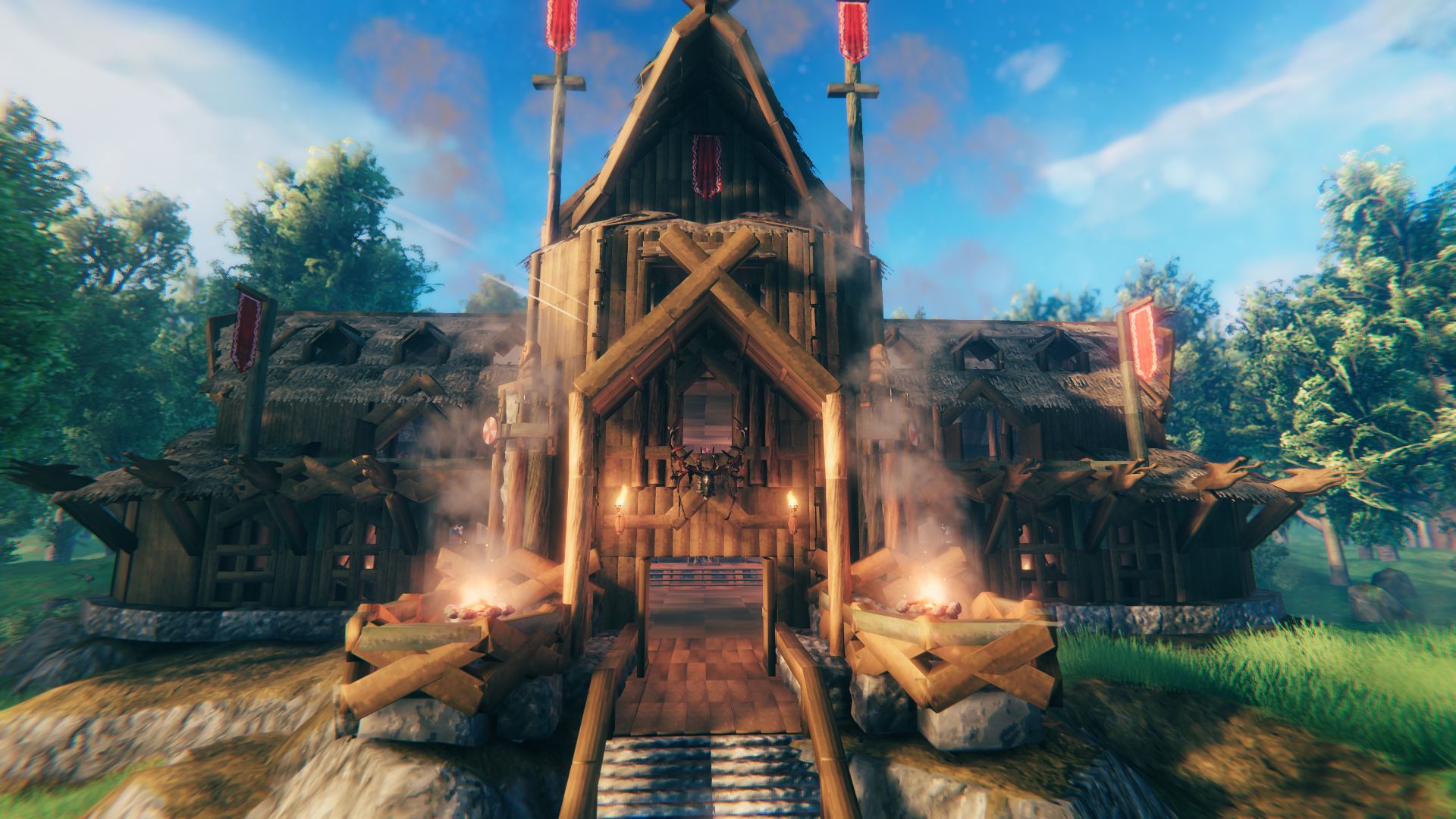 Here's a link to the GitLab repo I'll be referencing in this article: https://gitlab.com/briancaffey/valheim-cdk-discord-interactions

This is an in-depth technical article about running an on-demand, dedicated server for Valheim using Amazon Web Services controlled with Discord Slash Commands, a new part their Interactions API that is currently in beta. Valheim is an open-world online multiplayer survival game loosely based on Norse mythology that has blown up recently.

My main goal with this project was to find an inexpensive way of running a server given how my friends and I play the game, which is typically a few times a week in the evenings. Some combination of 4 of us will start playing, and we drop in and out between walking dogs, cooking, etc. When playing, we all jump on a dedicated voice channel on our group's Discord.

Before setting up a dedicated server, our game's world state was stored on files that lived on one of our computers, and that computer needed to be running the game server in order for anyone to connect. Sending files around would be possible, but would quickly become tedious. There are lots of services that offer dedicated servers for Valheim, as well as many technical guides and channels on the official Valheim Discord server to support the use of dedicated servers. I wanted to see if I could set up a server myself on AWS using CDK, or Cloud Development Kit. CDK is an Infrastructure as Code (IaC) tool that allows you to define, deploy and update AWS infrastructure with popular programming languages such as Python, Typescript, Java, etc.

The best part of CDK is that it enables the creation high-level, reusable constructs that can be published to software registries like npm and PyPI. Developers can import and use these constructs in their own CDK code. A quick google search for "cdk valheim" turned up a few results. cdk-valheim seems like the best option for what I was looking for. This project uses ECS, a container orchestration tool from AWS that I have experience using with web applications and EFS for persistent file storage. Although it is written in Typescript, I can still use the construct in my preferred programming language (Python) without any extra effort or configuration. This is thanks to the jsii. From https://github.com/aws/jsii:

jsii allows code in any language to naturally interact with JavaScript classes. It is the technology that enables the AWS Cloud Development Kit to deliver polyglot libraries from a single codebase!

Here's an overview of the cdk-valheim construct:

Scheduled ECS scaling is nice, but we don't always know when we will be able to play together, so it is not the best way to minimize infrastructure costs. My plan was to set the ECS service to an initial task count of zero and then let any of us set the number of tasks to either zero or one through a Discord Slash Command. A Slash Command allows you to interact with a discord bot by typing / and then tabbing through to the option we want, such as /valheim server start or /valheim server status.

Invoking a Slash Command from Discord sends a POST request from Discord to a webhook URL that we have to provide. To handle the webhook, one simple and inexpensive approach is to use API Gateway and a Lambda function that serves a Flask app. The Flask app can then use boto3 (which is included in the Lambda execution environment) to call update_service or describe_services to scaled the ECS task's desiredCount based on the slash command options and sub options.

Here's an overview of the server setup and how Discord Slash Commands can be used to control the server: 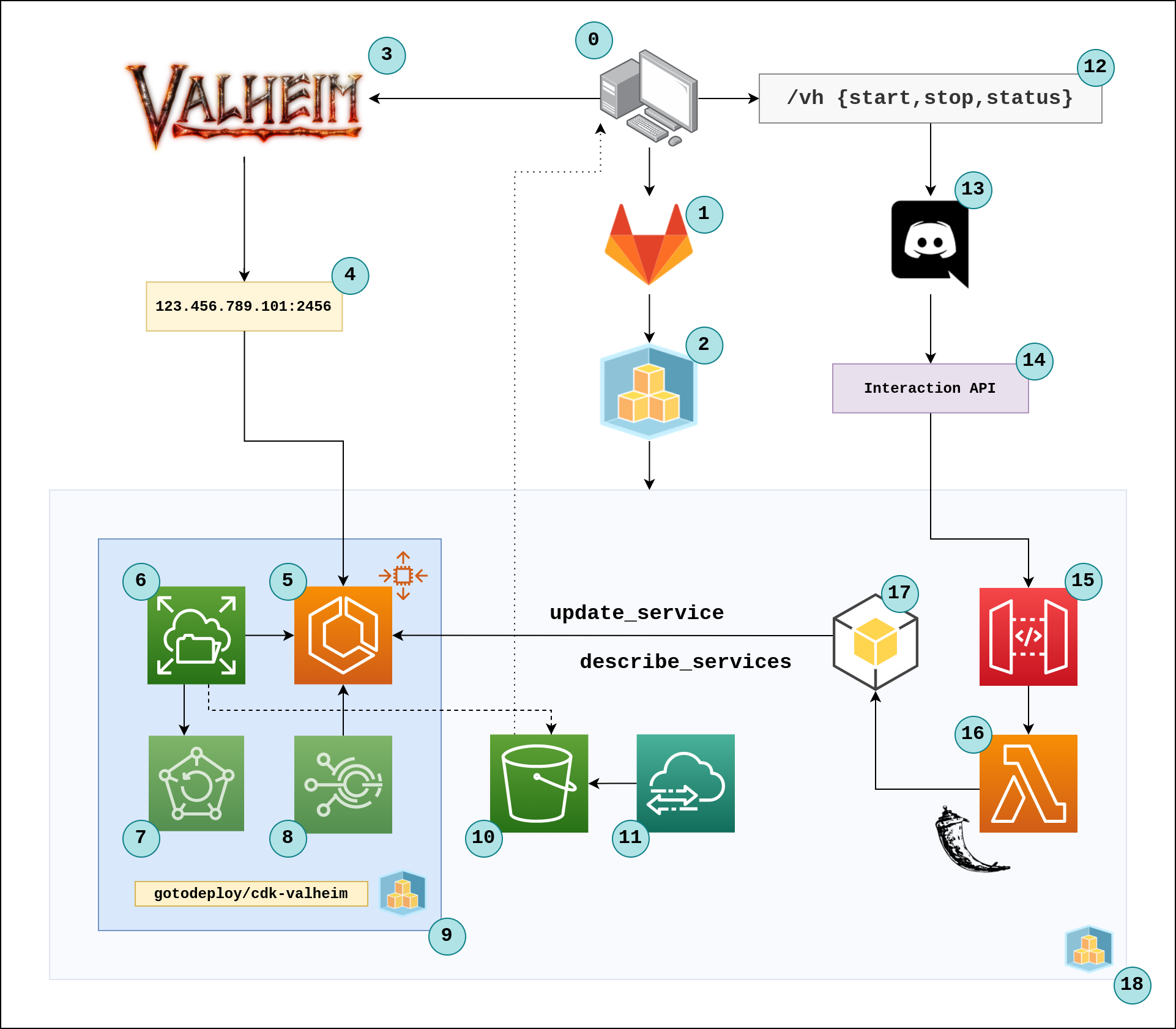 I'll cover each of the steps labelled in this diagram at the end of the article. The rest of the article will provide detailed instructions for how to set everything up. I won't be going over AWS account setup or Discord server setup.

How to set up the Discord developer application and Interaction

First, you need to be the admin of a Discord server. Once you create the server, go to Server Settings > Widget and take note of the Server ID. This is also known as the Guild ID.

Then go to https://discord.com/developers/applications and create an application. Under General Information, make note of the public key (the application ID). Put these values in a file that will be .gitignored called .env:

We will use this file later when registering the Interaction.

Next go to the OAuth2 tab and select the bot and applications.commands permissions. This will generated an OAuth2 authorization link. Copy the link and open it in a browser. We will see an error:

Configure a bot for our Discord application

Next, got to the Bot tab and click the Add Bot button.

Adding a bot user gives your app visible life in Discord. However, this action is irrevocable! Choose wisely.

Turn off the Public Bot option and save changes.

Get the bot token by clicking on Click to Reveal Token, and add this to .env:

Now we will set up the Interaction. Currently the only way to set up the interaction is through an HTTP POST request. This Python script sets up our Interaction:

Before running this command, source the .env file:

Then run the script:

You should see this response:

Now, when you type / in any channel on the Discord server that you authenticated the bot, you should see the vh command at the top of the list of autocomplete options.

If we run any of these commands, we should see a response saying:

This is because we have not configured an Interactions Endpoint URL under the General Information section of our Discord Application's admin page (https://discord.com/developers/applications/).

Setting up the Interactions Endpoint URL for our Slash Command

In order for our Slash Command to do anything, we need to set up URL that Discord will POST the Interaction event data to, including information such as who sent the Interaction, what channel it was sent on, what options were used, etc. You can see an example of the event payload here on the Discord developer documentation:

This POST request also includes some special headers used for security that we will need to do validation with our handling function. This part can be handled with a decorator provided by the discord-interactions package on PyPI, but we will need to add some additional configuration to our API Gateway endpoint since these headers will not be passed through the lambda by default.

Setting up AWS infrastructure with CDK

Let's start a CDK project in a blank repository that will define our infrastructure, Lambda functions and CI/CD pipeline with GitLab CI. Make sure that you have the aws-cdk CLI installed globally:

Then start a CDK project in a subdirectory called cdk with:

The next step is to add all of the dependencies to our CDK project that we will use in this project. In setup.py add the following:

Next we can add the CDK construct for ValheimWorld in the cdk_stack.py file that was generated in our project as well as the imports for the packages we included in setup.py:

We are almost ready to deploy a basic version of our Valheim server using the cdk-valheim construct. If we were to run the following command:

from the root of our project, it should work. This assumes that we have default credentials configured in ~/.aws/credentials and that we have also bootstrapped our AWS account with the resources it needs for CDK to work:

Instead of deploying from the command line, it would be better to run the deployment from a CI/CD pipeline. Add a .gitlab-ci.yml file to the root of your project and populate it with the following YAML:

Next, create a GitLab repository and add the remote to this project with:

Now under Settings > Repository > Protected Tags, add a wildcard (*) so that all tags are protected and only maintainers can push tags. This allows us to use the protected environment variables only when a trusted maintainer pushes a tag to the repository.

We are almost ready to create a tag and push to GitLab, but before we do that let's change the name of the CloudFormation stack that CDK will create in cdk/app.py:

Now commit changes, create a tag and push it to GitLab:

Check the logs of the GitLab CI pipeline that this creates in your GitLab project's CI/CD settings.

The requirements.txt defines the pip dependencies for our Lambda function. It should include the following:

Here's the code for lambda-handler.py:

Notice how we pass the Flask app to awsgi.response. aws-wsgi (or awsgi as it is imported) is the go-between for API Gateway and WSGI.

We have to give the lambda function permissions to make changes to ECS since it will be interacting with ECS via boto3.

self.request_templates is needed in order to pass the special security headers from the Discord POST request that are needed for security. I couldn't find a lot of resources on how to make this work, but I learned that this uses Apache Velocity Template Language.

There's one more step before we can push our code. We need to add another GitLab CI job that will install the Lambda dependencies so that they can be sent to the Lambda layer that we defined in our Lambda function. A Lambda Layer is where you install dependencies for this type of Lambda setup. Let's add the following stage:

Now we are installing dependencies into a target location (with the -t flag) that our Lambda Layer will be able to use in the cdk_deploy GitLab CI job. This is because we have indicated the path to layers/flask/python in the paths array of artifacts in the pip_install job. There are other ways to add the pip dependencies to the Lambda Layers. We don't absolutely need this to be done in a separate CI job.

Now tag and push the code to GitLab and check to see that the pipeline runs successfully.

If everything runs smoothly, we should see a URL in the very last lines of the pipeline. This is the URL for our API Gateway endpoint:

We need to add discord to the end of this URL and then add that to our the Interactions Endpoint URL in the General Information section of our Discord application's admin page:

When we add this URL in the application settings, Discord will make sure that our endpoint is properly verifying the request based on its headers. Check out this function to see how it works:

This is all covered in the documentation for Discord Interactions.

Now you should be able to run the Discord slash commands. You can get the status of your ECS cluster and scale it to either 1 or 0 for ON and OFF.

Here's an overview of what we covered:

There are still some things that I'm working on finalizing.

Join my mailing list to get updated whenever I publish a new article.
Thanks for checking out my site!
© 2023 Brian Caffey