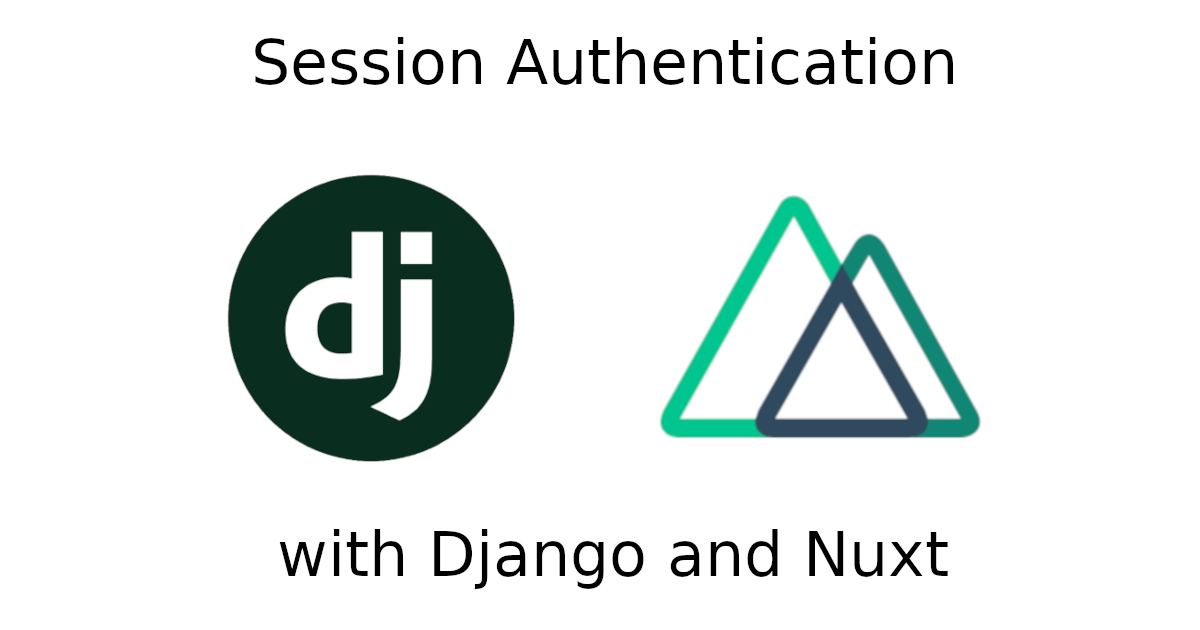 This will be a continuation of the discussion about how data flows in Django + Nuxt applications, looking specifically at session authentication.

Here's a GitLab repo that where you can find the source code and other diagrams related to this project:

This diagram focuses on the interactions between:

For illustration purposes, I'm using a simple CRUD application that has two models: Users and (blog) Posts. Users can log in with email and password credentials and create, read, update and delete blog posts (CRUD). Currently I'm only doing the R (read) of CRUD: listing and viewing blog posts. Creating, updating and delete will be added later. For now, users must be logged in to see posts.

I'm still learning a lot about Nuxt and how it can be used with Django and Django REST Framework. This project is an effort at documenting my learning process, learning in public and learning from mistakes, so any feedback or guidance on what I have written here would be highly appreciated!

Using Nuxt (with Server Side Rendering, or SSR) is one of many ways to use Vue.js with Django. Vue is a progressive framework, which means that it can be gradually adopted into a project--you don't have to go all-in on the framework or rewrite the application from scratch to fit with how Vue works.

Different ways to use Vue with Django

In terms of Django, here are some ways that you can use Vue:

In these scenarios, Vue is served as either static assets (such as in the case of serving a SPA over a CDN), or Vue code is included in an HTML response from a server (where the view library, not your application, is served over a CDN), similar to how jQuery is used.

Different ways to use Nuxt

Nuxt is a Framework that can be used in a few different ways, I'll briefly discus three ways in which Nuxt can be used. Common to all three of these ways of using Nuxt is the directory structure. No matter how you use Nuxt, it provides a great way to organize Vue code.

The main reason for using Nuxt is to render the first page loads on the server, returning a complete HTML response that can be beneficial for SEO, social sharing, and other scenarios where you need control over how a website's pages are delivered (specifically, the initial request made to the server).

This type of control is not possible for applications that serve Vue over CDN since they can only request backend API data once the JS client has been requested from a CDN.

Using Nuxt for SSR introduces quite a bit of complexity in both the application deployment and our Vue code. The backend API won't have to change at all when moving to Nuxt from a static Vue SPA.

Django alone is capable of returning fully generated, SEO-optimized HTML for each request, but applications built with Vue and Django templates may be difficult to work on as the project grows larger and larger. The Django/DRF + Nuxt approach may be more appropriate for projects with dedicated backend and frontend teams.

One other potential downside is added latency because of the "double request". If the Nuxt server and the Django server are on the same machine, then this latency will probably be a non-issue. 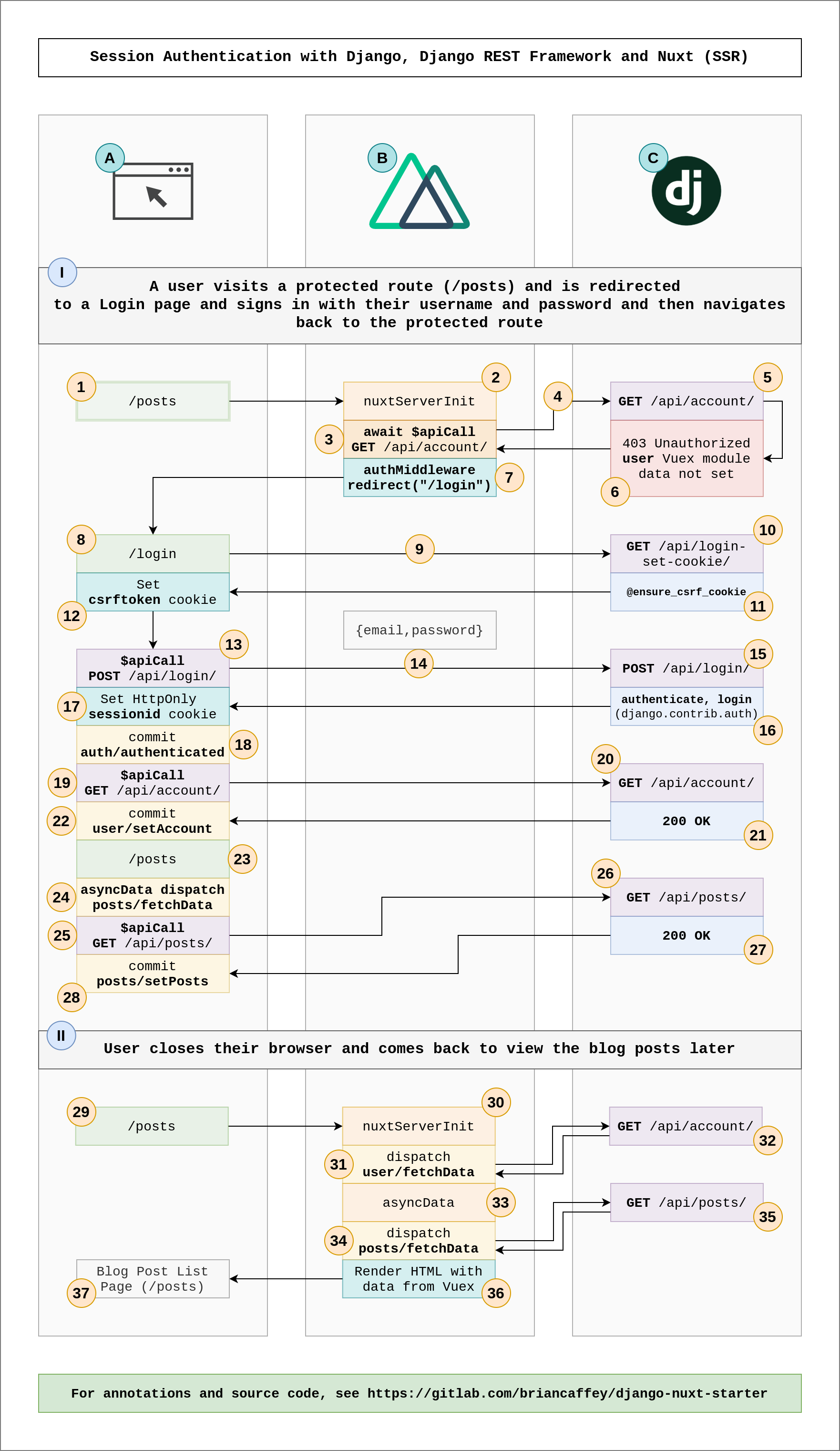 This diagram looks at session authentication with a focus on the browser, the Nuxt server and the Django server. It looks at two simple user stories, ordered from top to bottom in the diagram.

I. An existing application user visits the site in a new browser, navigates to the Login page, logs in with credentials and then visits a protected page: /posts. II. The user closes the browser and then comes back directly to the /posts page.

These two user stories sound simple, but they touch on a lot of the features of Nuxt that make it powerful, and complicated at first (for Vue users). These include:

Some important parts of Nuxt that this diagram does not (yet) touch on are:

User story I.: A user tries to open /posts, is redirected to /login, logs in, then navigate to /posts and sees blog posts

10, 11. This endpoint calls a simple view that is decorated with @ensure_csrf_token.

15, 16. The /api/login/ URL calls the login_view which makes use of two functions from django.contrib.auth: authenticate and login. authenticate gets a user from the provided email/password, and the login function sets an HttpOnly sessionid session cookie on the response.

20, 21. Since the sessionid cookie is set and sent along with the request automatically, this request will succeed.

26, 27. /api/posts/ uses a ModelViewSet and returns a paginated list of blog posts

Is this authentication process overly complicated? When I make these diagrams, I try to make simple concept as detailed as possible, but there are a lot of distinct actions being taken in many different parts of the application and getting them all into one diagram was tricky.

Session authentication is the officially recommended way to do authentication with Django REST Framework for clients that run in the browser. However, there seem to be lots of people using JWT with DRF and Javascript clients that run in the browser. The main argument against doing this is that the JWT must be stored in a Javascript-accessible store (localStorage or Cookies) so it can be passed with each request. Many people are also interested in trying to store JWT for authentication in HttpOnly cookies to harden client-side security. I'm very curious to know if anyone is actually doing this, and what the implementation looks like. While djangorestframework_simplejwt doesn't support HttpOnly, there seems to be lots of interest in doing this. I think it might be possible with a special middleware, so let me know if anyone is interested in proof-of-concept/diagram for that.

Some use cases for JWT and other token authentication methods with DRF might include native mobile apps or Desktop apps. For most cases, I think session authentication with Django's built in session cookies for DRF authentication is the best option. JWTs also have no clear solution for logging out, which may be important for some security considerations. The concept of stateless authentication is interesting, but for most use cases I would argue that it is not worth doing. Let me know if anyone has thoughts on this, I'm curious to see what everyone thinks.

My next steps for this project/repo are to deploy this to a production environment as soon as I have time to do so. My local setup has been working well, and I think it should work well for a simple DigitalOcean docker swarm deployment like I have done with other Django + Vue projects.

I also want to add the create, update and delete functionality for posts, improve error handling with API calls, add form validation, and maybe write some tests with Jest.

Here are some questions and areas that I still need to investigate.

Nuxt looks like it has plans to support Vue 3, so I am interested to learn more about Vue 3 as it is adopted by Vue frameworks such as Nuxt and Quasar.

I think I am using server middleware correctly, it can be improved by redirecting to the initial requested route after successful login. I'm not sure if I should use the Nuxt auth module in this application, I have read that it doesn't support HttpOnly cookie use cases, but I could be wrong.